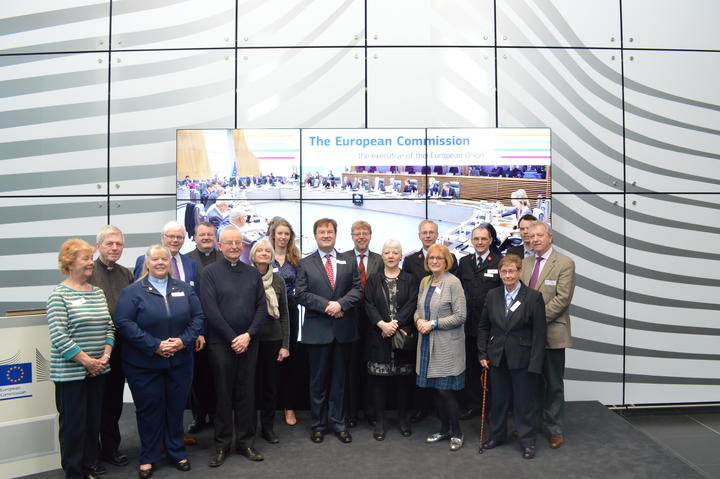 Pamala McDougall and Joyce Taylor report on their visit to Brussels from 5th to 7th April as part of an Action of Churches Together in Scotland (ACTS) delegation to the European Commission.

The party was made up of 16 people from 8 denominations plus 2 from ACTS and the EU group facilitator. The aim of the visit was to inform churches in Scotland of the work of the European Commission ahead of the referendum.

The timing was just 2 weeks after the Brussels bombing and arrangements were changing right up to the last moment. In the end we flew to Antwerp and were bussed to Brussels.

A mound of flowers less than 20 yards from the hotel outside the Maalbaek metro station was a poignant reminder of the recent bombing where 18 people died and over 200 were injured.

We had 2 packed days of pr 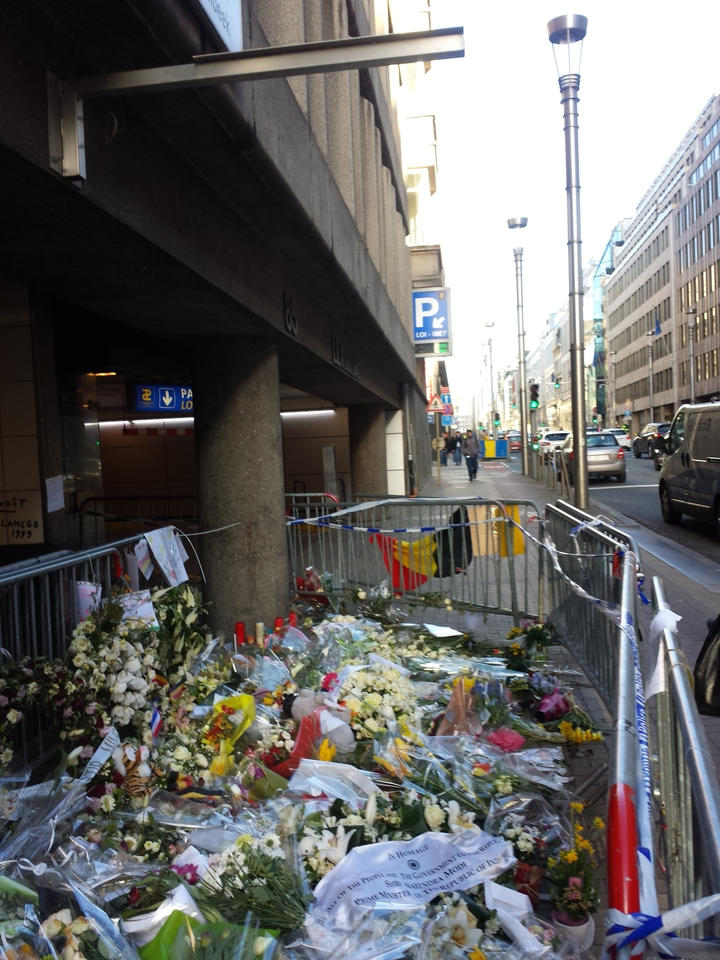 Flowers at Brussels Malbaek station, April 2016
esentations on the role of the EU Commission, migration, TTIP, the single market, the circular economy and European external action as well as meetings with the Scottish Government Office, 2 Scottish MEPs, the Conference of European Churches and with Katherina Von Schurbein – Co-ordinator of Dialogue with churches, religions, Philosophical and non-confessional organizations –a term used to describe organized secularism – associations which provide support for agnostic, atheist, free thinkers and secular humanists.

The European Council which is made up of the heads of governments of member states plus the President of the European Commission defines general political direction and priorities.

The EU Commission works as a college of 28 members, one from each member state. The Commission proposes legislation, implements policies, allocates EU funding, enforces legislation through the Court of justice in Luxembourg and represents the EU internationally.

President of European Commission is Jean-Claude Juncker who has set out his approach as one of doing less better. He has set 10 priorities and has terminated a number of proposed pieces of legislation which were moving too slowly or were deemed not to fulfil their aims. The theme of his priorities is improving people’s lives by creating jobs, through growth and building a fairer society.

Migration was a topic which was discussed in several of our meetings and has clearly had a considerable impact. The agenda has 4 pillars: to reduce incentives by dismantling trafficking and clarifying illegal migration, save lives, have an EU wide common asylum policy and create safe and legal settlement of migrants. The present resettlement plan is seen as a shameful failure as member states have not worked together. Of 160,000 refugees the EU has only been able to resettle1000. We also heard criticism of Angela Merkel’s initiative offering sanctuary to over a million which was seen by MEP’s as unhelpful as she hadn’t consulted her EU colleagues. 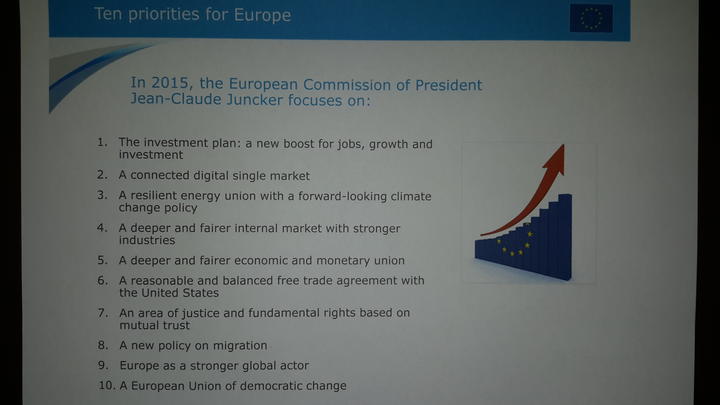 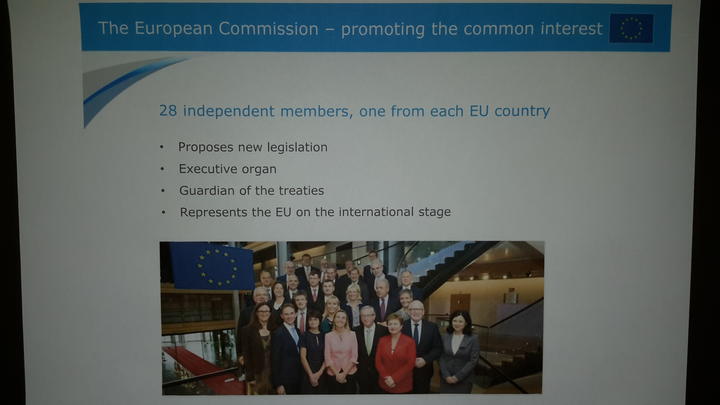 On The Transatlantic Trade & Investment Partnership, the view we were given was that TTIP is important for the growth of Europe in a global market place- 90% of growth will take place outside the EU and evidence shows that trade deals promote growth and jobs. The world economy is changing because of the way goods are produced - products are no longer made up of parts from one country for example a mobile phone is made up of many parts from different parts of the world so Europe needs easy access to the supply chain. EU officials seemed slightly bewildered by the strength of feeling against TTIP – I suggested some of that may have been because of a sense that things were being negotiated behind closed doors. Trade deals also include human rights chapters, and standards for labour conditions. It is interesting that since we came back this very issue looks like derailing TTIP- as the French say that if the US will not embrace the EU standards then they will walk away. More recently Quakers in the US and the UK have made a joint public statement expressing opposition to TTIP. 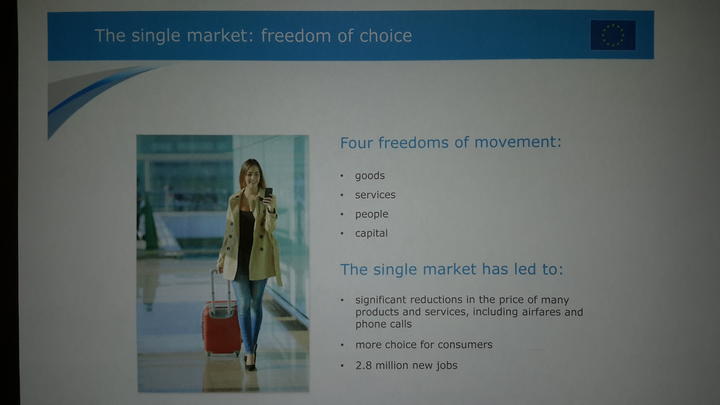 The Single Market embraces freedom of movement for goods, services, people and capital. This is easier to achieve in some sectors than others. For example with services - management consultancy is the most likely to be able to do cross border one of most difficult is construction because of different insurance regimes in member states. In response the EU is looking at creating a services “passport”. Another part of having a single market is preventing discrimination for consumers depending on where they live eg the cost for the same package holiday to EuroDisney was considerably different depending on where in Europe you were booking – €1,346 in France, €1,870 in the UK and €2,447 in Germany.

Environmental policy was once seen as issue specific but now the EU recognises the need for a systemic response to the concern that water, land, energy and raw materials will all be in short supply by 2050. A linear economy is one where resources are used in a Take – produce -- consume – dispose model. Now the aim is to “close the loop” - resources – production – waste management - resources. The idea is that the value of products, materials and resources is maintained as long as possible, waste generation is minimised, the economy is boosted by new business opportunities and there are economic, social and environmental gains. Example – there is 1 gram of gold in many mobile phones – how can this be recouped? How can we ensure products are reparable, robust and recyclable? 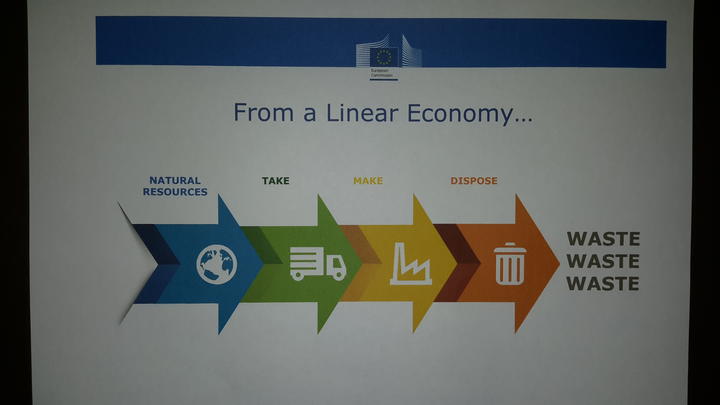 Diagram of a Linear economy 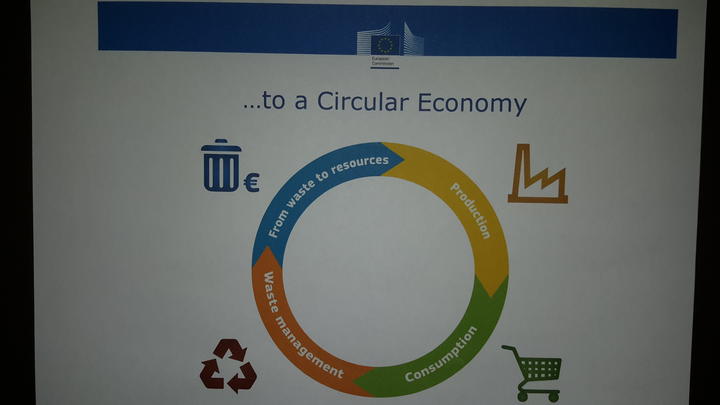 Diagram of a circular economy

The EU is the biggest provider of development aid in the world providing over half of all development aid. The EU external action programme is involved in political dialogue, outreach (not just to politicians), security and defence, crisis response, development, election support, humanitarian assistance and sanctions. The example we were given was the work in Central Africa where there are multiple problems: – conflict and insecurity, poverty among the populations but countries with rich resources, issues of democracy and governance, the colonial legacy, weak civil society and religious radicalism. Interesting for us because of this year’s Swarthmore Lecture which speaks about peace making initiatives in Central Africa. 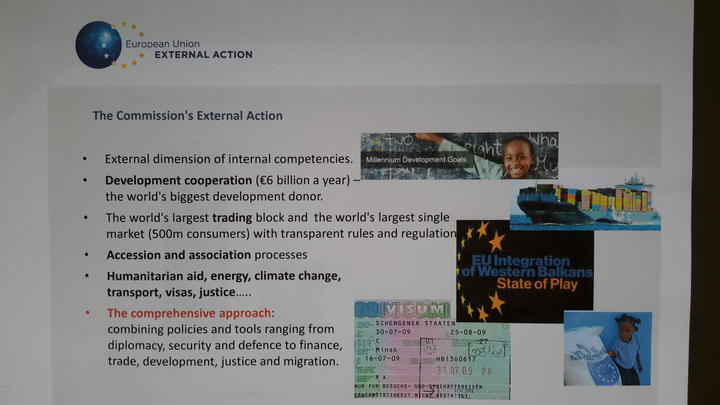 The Scottish Government office has been there since 1999 and has 3 purposes –to support Scottish ministers and officials, to engage in all policy areas where ministers have responsibilities, to showcase what Scotland is good at and make Scotland known- for example reminding in legal affairs that Scotland is different from the UK.

Our final Meeting was with the Conference of European Churches at the Ecumenical centre. They are working on Human Rights issues, the refugee crisis, people trafficking, climate change, economic justice, growing inequalities and discrimination against others.

Some observations from our visit: presentations were given by articulate and committed people who were understandably enthusiastic about the European project. They were very frank when answering questions and acknowledged that there need to be changes. Things do move slowly and getting necessary agreement can take time – worst example being the refugee crisis. There was recognition that the populations of member countries are critical of the EU and in recent referendums voters have been negative. For example while we were there voters in the Netherlands had overwhelmingly voted against a Ukraine-European treaty on closer political and economic ties. On the issue of the possibility of Brexit we were told that unlike the Scottish Independence referendum when there was a lot of discussion and planning about what to do in the case of a yes vote, the Brexit scenario is not being worked on as this would be recognition that this is a real possibility. There was acknowledgement that Europe hadn’t listened enough and needed to reform if voters in member states were not to become disillusioned. There was a common theme of growth and nearly all presentations were framed by the desire for growth however it was recognised that growth needs to be balanced by other considerations for example the environment and people’s rights.

It was a packed agenda with little time for us to process or discuss what we had heard as a group. There were times we yearned for moments of silent reflection but it did provide a real insight into the work being done by the European Commission and that there is a huge amount of information available which we are now much more motivated to follow up having had that experience.