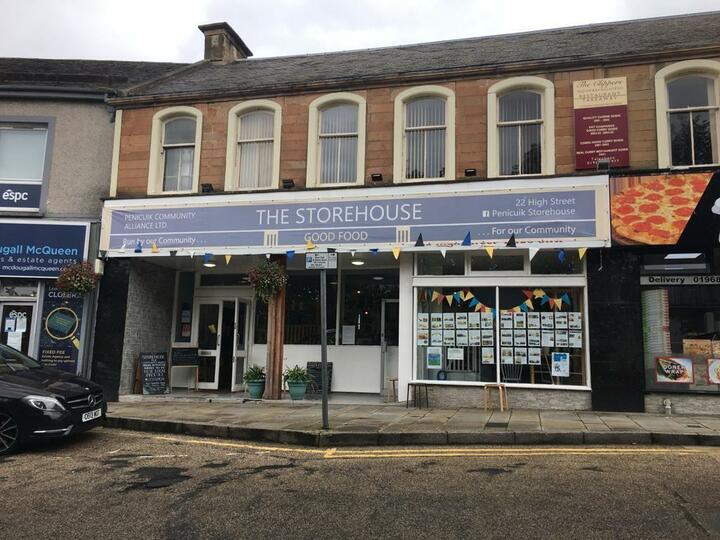 Welcome! This is the first of a new series about what we and others can do, and are doing, about the climate emergency. It’s partly inspired by words from Mary Robinson, former president of Ireland and UN Commissioner on Human Rights:

First of all, make climate change personal in your life. Second: ‘Get angry and get active’.The third step – and I think this is the most important – we have to imagine the world that we want to hurry towards.

We start with FOOD. Edinburgh city council recently launched Edinburgh Talks Climate, a place where people can find tips, share ideas, inspire others, and take local action to help address the climate emergency. They want to hear from people about the sustainable food choices we’ve made, or how we’ve managed to reduce food waste, join the discussion.

Here’s a quiz to get you going:

a. How many people in the UK suffer food poverty or food insecurity? (it’s the worst in Europe)

b. A lot of junk food is eaten. What percentage of people in the UK are either obese or overweight?

c. How much does Type two diabetes alone cost the NHS a year?

d. What percentage of UK overall waste comes from what's in our bins on a household level? And how much of that gets recycled?

e. Global agribusiness is worth £2.4 trillion every year. It is concentrated in the hands of a small number of very large and powerful organisations. How many?

g. How many companies control 70% of the agrochemicals business that supports that industrial agriculture system?

h. How many supermarkets control the food market?

i. What percentage of fruit that we eat is produced at home?

Some ideas about what we need

What Friends in South-East Scotland Area Meeting are doing

THE PENICUIK STOREHOUSE is a community-owned enterprise with a small shop selling coffee and pastries and a range of healthy locally grown organic and fair trade fruit, veg and other produce. It is also a great deal more …Our Friend, Jane Kelly, tells the story:

30 years ago, when Roger and I wanted organic, fairtrade, environmentally-sound produce for our family which we found hard to source locally, we began to buy in bulk and opened a weekly “not-for-profit shop” for 2 hours each Saturday to sell the surplus. Gradually this evolved into an enterprise listed in green magazines. In the mid-1990s we became a collecting point for organic vegetable boxes as well as surplus produce from our own and others gardens. The hallway of our house became a hub for like-minded people to exchange ideas and make friends.

We began a local Quaker meeting, then we all started a Development Trust with a weekly Open House in the Town Hall and a weekly public cinema. By 2008, we planned a food-growing initiative in a local walled garden and began hosting the first of 200 help-exchange helpers from around the world. Local and corporate volunteers joined our growing initiative, we got £30,000 Climate Challenge funding from the Scottish Government, and many of us felt empowered to turn our growing into a 7- day retail community hub to help eradicate food poverty and food waste.

In the summer of 2015 we planned offering shares in a community benefit society to take on big empty premises in the town’s High Street. This is a society entirely for community benefit, not member benefit, with strict democratic rules. Our proposals coincided with a Scottish Government community initiative to reverse decay in town centres, and we applied and were granted £150,000 towards our capital costs. With local schools’ involvement, we set about raising more thousands from the public in £25 shares. With hard work by local schoolkids and 100% doorstep leaflet drop, we met our targets and the capital grants conditional on that fundraising were paid. There were many obstacles of illness, resignations, unforeseen building problems and time delays, but the supporters held together and in November 2017 we transferred Roger’s weekly shop to a 7-days-a-week operation - the Storehouse. Thanks to a grant from the Scottish Land Fund, we were also able to purchase our building outright from its original owners, the Co-op, instead of renting it on a long lease.

Keeping the dream alive has taken plenty of energy. We have a community benefit society: Penicuik Community Alliance Ltd, to run the place. To begin with, volunteers ran the food shop, but now, with the help of grants from the Climate Challenge Fund, we employ 3 people who have brought the dream forward in leaps and bounds.

The whole purpose is to reconnect people with their own food production and supply, with issues of food poverty, community nutrition and food waste.

From its beginnings in the 2015 share offer, The Storehouse has always had a strong presence on social media. Its selfless band of loyal customers and volunteers has given our community remarkable resilience throughout COVID19 lockdown. In the face of the inevitable building control delays, we have a busy working shop, fresh produce suppliers, a refillery, heating systems, two street frontages, a passenger lift installed and the basis of a community café. To prepare for this before lockdown, we ran a weekly free community café in a nearby church hall. An indoor market is planned together with a lot more social and training space once the big upper floor is fitted out. The community has no shortage of ideas!

From the start, the Storehouse has supplied delicious whole milk to customers in returnable glass bottles from an independent farm on the Isle of Gigha by sharing a pre-existing delivery route. During the great winter freeze two years ago when supermarket milk supplies couldn’t reach this town and undelivered milk in transit was being emptied to waste, our usual deliveries got through.

Response to the pandemic

The Storehouse was ready to step up to community’s needs when the pandemic began. In the weeks before lockdown our business was already running at double its historic level. With central and local government support, the Storehouse became a focus for supplies to the vulnerable and isolated. And with many of the previous helpers shielded at home, a new army of volunteers stepped forward, making facemasks, putting safety systems in place, packing fresh produce and grocery boxes, delivering to households and collecting daily flour supplies from our local mill, working flat out. Our community shop manager played a key role and the shop remains open seven days a week.

Currently, vocational training is being given to youngsters for a 3-week period, leading to possible longer and more lasting involvement. This is proving popular. It’s not restricted to retail. There are opportunities with IT, with hospitality, with building work, with local identity and with growing food. Working at many levels and through local events, the Storehouse will aim to extend the reach of recycling and zero waste, with a clear place in the very heart of the town and its community.